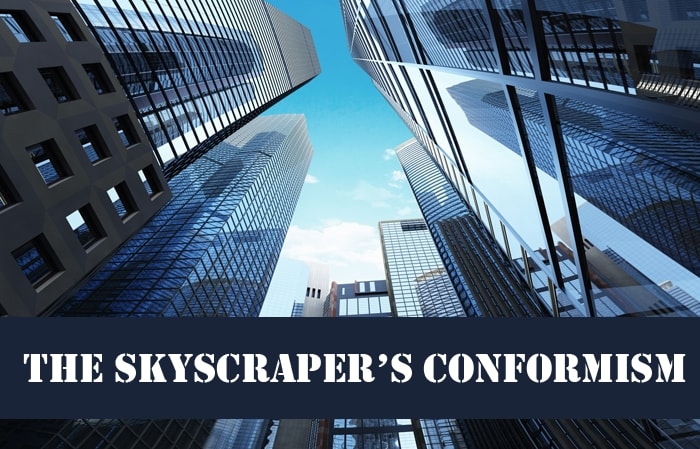 Selling Cloud software around the world is definitely a challenge. But, after quite a few negotiations, I realized with surprise that an unexpected factor was blocking the hands shaking. A factor that I call: “the skyscraper’s conformism”.

Selling Cloud software around the world is a challenge for many reasons, , no matter if it is a CRM Project Management or Tasks Management or Enterprise Collaboration or Business Intelligence software. As with any new technology introduced, Cloud CRM software still faces Roger’s adoption bell curve. Even though Cloud computing is not considered a new technology (the idea dates back to the 50’s), the broad implementation of the technology belongs to the 21stcentury due to the usage explosion of mobiles and tablets. Cloud Software (with the exception of e-mail providers like hotmail, yahoo etc.) is quite new to consumers.

Secondly, it is hard to sell a product that the customer cannot physically hold and feel ownership. A product that doesn’t have any physical dimensions and moreover, since it runs on the Cloud, doesn’t even come with a CD!

All the above are issues that can be somehow handled: by facing them one-by-one, by adopting customized approach per customer, by redesigning strategy according to feedback, by focusing on Cloud’s advantages and on Cloud’s high ROI.

However, during the discussions with potential customers, distributors, CRM vendors and partners, an unexpected pattern became clear: the decision makers in developed countries were more hesitant to buy Cloud services than those in the un(der)developed ones.

In sales, one of the most difficult parts is to harness one’s mentality, his preoccupation on something. Yet in this case, it is not a preoccupation. It is not technology ignorance, it is not security fears (even though much of the negotiation is always around this topic) and it is not change management concerns.

The pattern comes from the inherent human characteristic of self-preservation. Nobody wants to change a winning team. Decision makers in developed countries prefer to leave their competitors take first the risk of trying the new technology. To the contrary, un(der)developed companies are more risky (perhaps because they are more carefree or because they want to quickly catch-up).

It was truly amazing to sign a Cloud Software agreement with a Sierra Leone customer, whereas a German one preferred an onPremise installation (of the same product) simply because: “for my company, I prefer a classic, conservative and tested software approach”…

How to be creative in the daily routine of sales.

This website uses cookies to improve your experience while you navigate through the website. Out of these cookies, the cookies that are categorized as necessary are stored on your browser as they are essential for the working of basic functionalities of the website. We also use third-party cookies that help us analyze and understand how you use this website. These cookies will be stored in your browser only with your consent. You also have the option to opt-out of these cookies. But opting out of some of these cookies may have an effect on your browsing experience.
Necessary Always Enabled
Necessary cookies are absolutely essential for the website to function properly. This category only includes cookies that ensures basic functionalities and security features of the website. These cookies do not store any personal information.
Non-necessary
Any cookies that may not be particularly necessary for the website to function and is used specifically to collect user personal data via analytics, ads, other embedded contents are termed as non-necessary cookies. It is mandatory to procure user consent prior to running these cookies on your website.
SAVE & ACCEPT
WPversion5.6.2