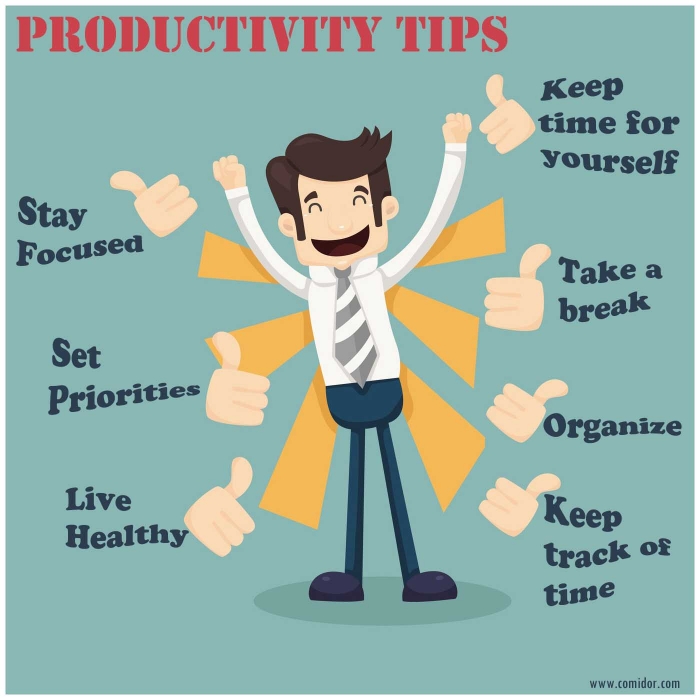 Productivity matters. Dozens of applications are developed to help in its measurement, whereas tones of ink (mainly the digital one) has been spent in articles regarding “How to” measure, boost, manage or whatever people want to do with their productivity. Thus, I started wondering whether all these tips and tricks work, because if they did the way and the hours we work would have been a lot different.

Trying to figure out these tips that do help employees become more productive, we have collected examples of real-life situations that people actually made some changes to the way they work or live and had a positive effect in their productivity.

Most of you may think how eating more fruits and vegetables can boost my productivity, but Richard Storm insists that from the moment he adopted a healthy way of living with balanced diet sticking mainly on greens and daily exercise, he takes on every day with a clearer head and a great amount of motivation and positivity. And he is not alone! Slade Casey, owner of BlueGrace Logistics Marietta is also a big believer of the relation between daily exercise and increased productivity at work. Running early in the morning makes you more energetic and enthusiastic at work.  But no exercise can be done without a good night sleep, as Louise Brace states. Kimberly Gauthier points out the importance of being hydrated as part of a healthier life, whereas staying active cuts back the amount of days she is sick. One more reason to start exercising!

No matter if we are living in 2015, no matter if technology rules our daily life there is one thing that most of people cannot start their work without: the hand-written To-Do lists. Ok, some of you may use applications, either web or mobile for that but admit, nothing can be compared with the feeling of erasing things with your pen from your To-Do list! Megan from eZanga makes her To-Do list at the end of each week in order to be ready for the following, whereas David Nakke from Money Crashers categorize his daily list in three categories, the Today tasks, the ones that need his attention and the minor projects that are great to be done in slow days. Mike Collins, owner of WealthyTurtle is also a To-Do list fan writing his list at the end of each day, in order to be the first thing to look at the next day. David Scarola from the The Alternative Board quotes: ”Plan for tomorrow today” and he also insists on preparing your next work before you leave the office. Mitzi Weinman points out that how you prepare for your day the day before will have the biggest impact on your daily production. Soura Bhattacharyya suggests a quite interesting way of managing daily tasks. He splits the day in two halves, the morning half for reviews and meetings and the afternoon half with at least 2 hours of uninterrupted time to work on projects. On the other hand, Brittany Berger from eZanga splits the tasks in smaller ones. She makes a To-Do header before breaking it down into as many separate tasks as possible. It lays out a clear plan for the workday and staring at a bunch of things that only take 15 minutes each is less daunting than looking at something that will take hours to complete. I guess she is right!So, Zen Cachola urges us to put a white noise as a background, get a full glass of water or tea and start organizing your daily list of tasks.

Or at least try to manage them! Laura Rose suggests leaving some place on our daily schedule for interruptions as working in a team they are inevitable! Remote working can really help when there are a lot to be done, as according to Olivia Carr around 77% of IT workers report that it really boosts their productivity. James Fayal from Zest Tea also agrees with that as he works in the office 3 to 4 days and work from home 1-2 days a week especially when there is tedious work to do. Asking for colleagues to group their questions or sending 8 or 10 emails at one time, instead doing it in 10 separate times are also some tips from Gayle Carson. Michael Diettrich-Chastain’s quote is also relevant with this:“Turn off, tune in and timing” that means define a specific amount of time, turn off any other distraction and stay focused on this. If the time passes, just stop and do something else!

So you are at the office with your To-Do list first thing in the morning and you are wondering what to do first? David Scarola quotes: “Set mornings aside for your most challenging tasks” and Martin Milanov also agrees with that urging us to get the most dreaded task out of the way! Working from higher priorities to lower throughout the day will make it easier to go to home at the end of the day, according to Mitzi. Never forget though, that if it feels a good time to get it done, just get it done. Sometimes there is no better time that the present. That’s what Louise Brace underlines and we totally agree!

Yes it helps! When you are flat out busy, stand up and take a break or even do some desk yoga as Fiona Patterson suggests. Dina Proctor teaches individuals and businesses how short bursts of focused thought or meditation can help them control stress and increase productivity. Laura Rose also helps people manage their stress and maximize their productivity telling them to take a deep breath and relax, as everything is unfolding perfectly. Try to rest your eyes every half out by cupping them with your hands in order when you open them you will not be able to see light, Ben Bernstein suggests. Music can also help you being focused on what you are doing according to Melissa Moraja. Last but not least, Mark Mathson insists on standing every 40 minutes for at least 2-3 minutes is the best productivity tip.

There is no point in creating To-Do lists and set priorities if you do not keep track of the time. Either with an hourglass like John Olson , or with a timer like Ben  or with a time tracking app like Jessica Bahr. Furthermore, Brittany Berger reminds us to set start and end times when working on something, as she says that it might help her complete it faster.

Stacia Pierce uses the phrase “Me Time” in order to underline the importance of taking some time in the morning to read, pray or meditate and focus on what you want your ultimate outcome to be. Greg Archbald seems to agree with Stacia as he insists on stop checking our emails and social media or newspaper first thing in the morning, but take 20 minutes and read something motivational, inspirational or educational instead.

It all started with this: #DevOps

How to boost your team’s productivity