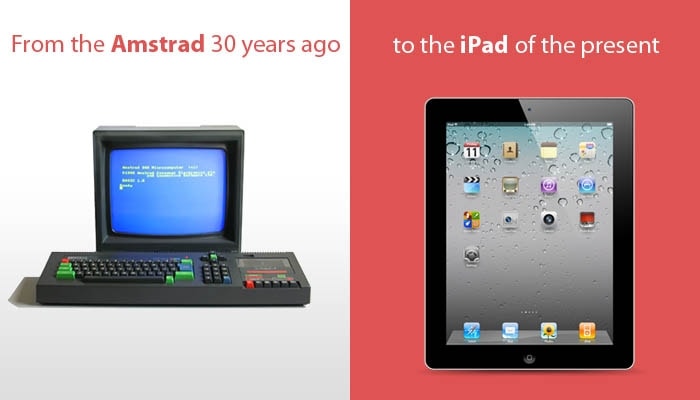 From Amstrad to Wearable Devices: my IT Reminiscence

Being born in the early 80’s I had the chance to live in a world in the breakpoint of technological changes. From playing in the playground with others, within a decade we were transformed into tech freaks that cannot live without internet, PCs and mobile phones. Sometimes, I am trying to remember what happened in technology as the years passed.

In the early 90’s (1990-1995) the coolest staff I can remember is an “Amstrad 6128”. An incredible PC for that time, where I learned to develop my first BASIC 1.1 pieces of code. Of course many other game consoles were at their primitive state (Atari and Nintendo Game Boy being the most favorable in my mind). I think that my experience from that period illustrates the general idea: The beginning of hardware development in PCs and the huge game console market, which in a way pushed one another in order to achieve what we have nowadays.

The 5 next years it was the “CD”. Many teenage hours spent in listening to dozens of bought and …not downloaded CDs(The CD turned 30: The first player and album were released in 1982). The flourish of CD industry found PCs in their best stage to develop. The wide spread of Microsoft’s Operating Systems (Windows 95, 98) – despite the contradictive arguments on how this spread was achieved – brought a PC to almost every family around the world. Its purpose was limited to writing docs, printing and listening to the music, but still it was a huge advance.

The millennium and the years till 2005 is the boom of the “Internet” (at least in my mind). The hardware development continued, however, the ability to communicate with people from any part of the world with IRC, ICQ and even MSN messenger changed the way people entertained and collaborated. As the connection speed increased the ability to download, audio and later videos became the trend of that period. You could download anything, even if you did not need it, just because it was there and you could click a button and have it!

The next 5 years “Smartphones” and “Tablets” came to our lives. My first HTC had Windows 6.5 which now many are mocking, but at that time the ability to read docs anywhere and to connect to the internet from any wifi was simply amazing. Apple’s IOS (iPhone) and Google’s Android soon created an explosion to the mobile devices, changing the game even in the hardware market, where smaller devices like tablets had to be manufactured. And with mobiles and tablets, the emergence of social media was instant. People could communicate with much better and faster ways than email.

But for the last 5 years we just evolve these technologies. The internet speed is evolving, the hardware continues to develop, smartphones and tablets are cheaper, Social  Media are everywhere and even start to focus on enterprise collaboration. The only thing that comes to my mind that may characterize this period is “The Cloud”. But is it something new? Actually not. It is the ability to have virtual machines somewhere in the world and software installed on it, which gives you the opportunity to handle your data from any PC and not just from the PC which you use at your office or at home. It may not sound like a huge innovation, but it actually is. If you remember the endless times that we had to copy files in disks, CDs, USB sticks and now all these are gone… You just upload it to the cloud and teamwork online!

My point is also my worry. Going to conferences and participating in technology debates, having all these IT reminiscences, it makes me wonder what will be my memory of the next 5 years. And there is a reason for that. Before every huge change in technology, there is a period of 1-2 years that you can predict the change; there are some first signs. What are the signs you can get for the future? The internet of things? The wearable devices? I have been hearing all these for more than 5 years now. Is it their time to flourish and give us an unforgettable era?! Well… (short) time will show!

You might also like
One of the following
Protect Your Work From Cyber-Attacks With Cloud Technology
What is a Cloud Platform? Benefits, Features, and Insights
Why You Need Cloud Business Process Management (BPM) Software

How confident do you feel in your startup flight?

Programming is not a piece of c++e